Ah... we finally get the repeat!

I am going to post my recommendations from last year below.  Here is a brief video with a couple updates:

This year's HSPU standard is slightly different with the box on the ground again.  I am not really sure why they brought it back since we have the line on the wall!  Personally (being 6' 4" or so), I liked being able to go a bit wider with my hands and not having to worry about the lines.

Looking back at my tips from last year, they are still spot on.  The only thing I may point out is that some people may be considerably slower than what is written below on the wall ball and the rowing if 'stature' isn't your strong suit. If you goal is to get to those handstand push ups, and you know the wall ball and the rows are going to make it hard, you'll have to try and make up some time on the deadlifts!

I'd also like to point out what we saw during the Open announcement with Brooke. You can definitely see the 'arched back', hands far away from the wall, variation that I talk about in both videos. 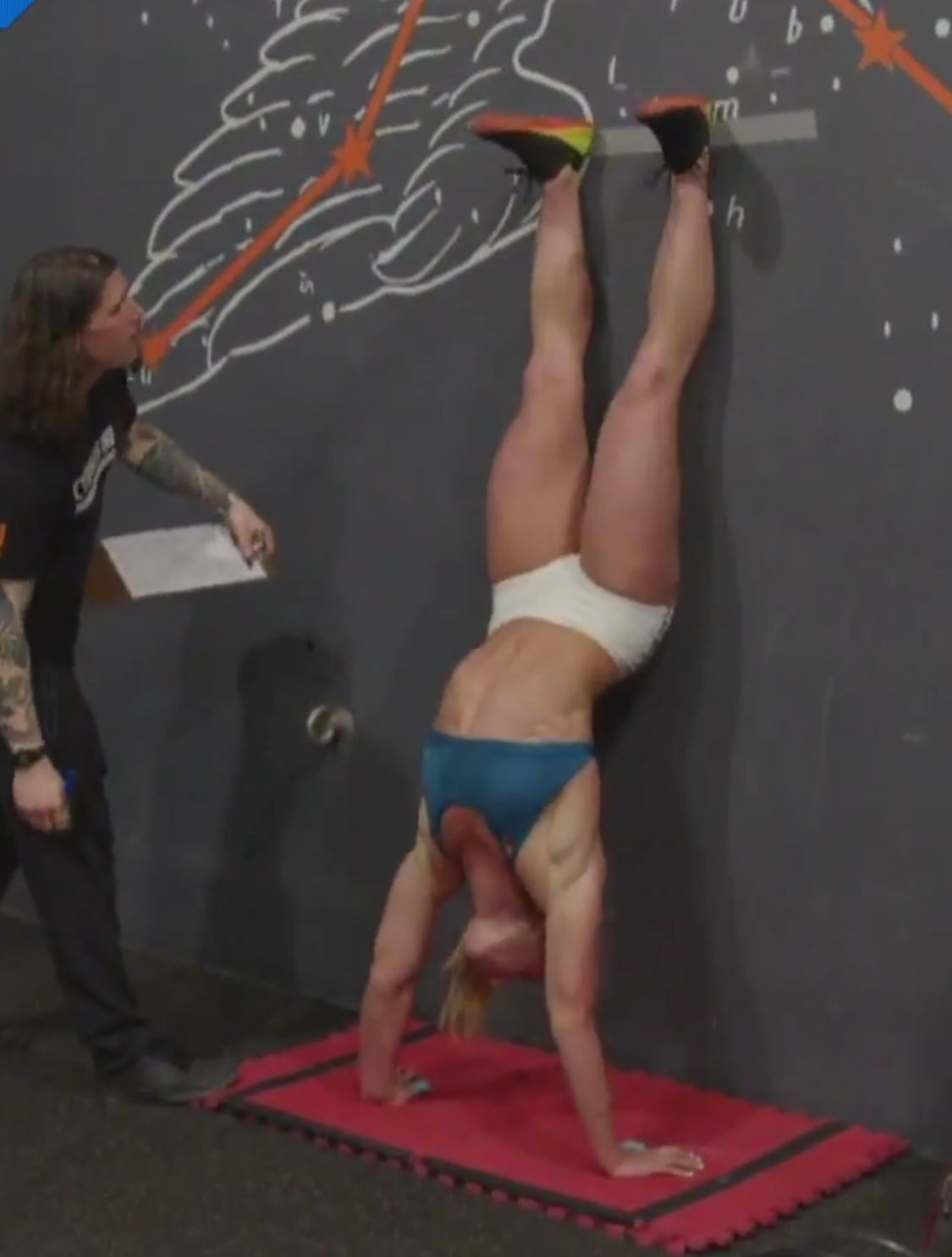 Without the line on the wall, this variation can be faster, but clearly it causes issues when you have to get those heels up!

One more week!  We will likely see double unders, thrusters, ring muscle ups, or burpees. Keep working on these skills before next week!

I am pretty thrilled about this one as I love to program combinations like deadlifts and wall balls, rowing and handstand push-ups, deadlifts and HSPU, etc.  Probably the movement most likely to hurt the most people is the deadlift, and we get it out of the way early on.  Handstand push-ups can be dicey too, but for people who aren’t good at the other movements, they won’t have much time to huge amounts and risk neck injury.

Watch the (somewhat lengthy) videos for movement breakdowns and pacing info, but here is the gist:

Keep the sets relatively small with minimal rest.  Dropping from the top will save a bit of energy and spread out the wallop to body.  Used a mixed grip and be sure to keep the bar close to the body.  If the bar drifts away from the legs on the pull, slow down and engage the lats.  Wear flat soled shoes (or go shoeless) so you have less distance to pull the bar.  Don’t wear Oly shoes!

Start with a set that isn’t too huge.  5, 10, 15… whatever is ‘small’ for you.  BUT don’t waste time from the deadlifts and that first set get to the target and start.  After a set or two you should be able to determine how big you can go.  Try and finish with some bigger sets.

Don’t forget to catch the bottom of the ball and to flip the fingers and the wrists every rep.  It requires much less shoulder drive (many can hit the target without full arm extension this way), and this will pay off for the HSPU later.

The faster you row, the less the amount of meters you have to actually go.  It is like running a race where the finish line is slowly moving away.  This type of effort rewards people for going a bit faster since they will have less total distance to travel.  That said, push the pace a bit on the row.  Be careful to avoid destroying yourself, but keep in mind that the tie breaker is after the row so a 5-10 sec faster time could pay off (even if you have to rest those seconds and more before your first HSPU).

From someone who had a couple hundred people do last year's Open at his gym... and the wall damage to prove it:

Use painter’s tape! The wider the better (not just the typical 1" stuff if you can get it). Duct tape will pull the paint off of any painted walls, or leave sticky grey glue.

I am a fan of making the bottom of the tape the boarder. Most people (who know how to kip properly) do not drag their heals up on the way up for the majority of their reps. They drag them down the wall on the way down.

Practice hand placement beforehand, and mark the floor if possible. The old style of doing these with the hands away from the wall with as wide-of-hands-as-allowed is only going to mess you up.  Keeping the hands closer together and closer to the wall will ensure that you aren’t selling yourself ‘short’ (so to speak).

The key to the kipping handstand push up is always using the most leg drive as possible.  Think of it like a really heavy thruster.  Tons of leg drive and hip pop… then the arms don’t push until the lower body has given all it has.  Think about kicking a hole in the ceiling (with the heel being the highest point of the body, not the toe).

Taking the time to dorsiflex the foot at the top of each rep should avoid no reps.  Having a neutral or (worse) pointed toe will mean that the correct amount of work will not get credit.  For some, the coaching cue “push your calves to the wall and heels to the ceiling” helps.

A little known tip is to take some time to mobilize your wrists before HSPU.  The extreme hand position causes the rest of the tissues to bind up at full extension and make lockout that much harder.  Some extra wrist range of motion will mean a lot more efficiency, especially at higher reps.

The video got cut off at the very end. The only other thing I was going to add was that the faster athletes should be able to finish these in the 3 min minute range.  Doing that will mean they have 4 minutes to go into the next round.  Very few people will make this happen, but we should see some make it back to the wall balls even!

Have fun and spend the time to make sure you have spent the time to get your kipping handstand push-ups dialed in (placement and technique wise)!  If possible, set it up with your judge so they can give you a warning when you are getting close to no-repping.

Thrive on (and only one more week after this)!