Chest to bars?  I feel bad for those people who tore their hands last week!  Another great workout though. I love workouts that get progressively heavy/hard so that more people can participate, and the real ‘go getters’ have to work hard to separate from the pack. I also think it is pretty cool that you can have ‘friends’ load your next bar for! 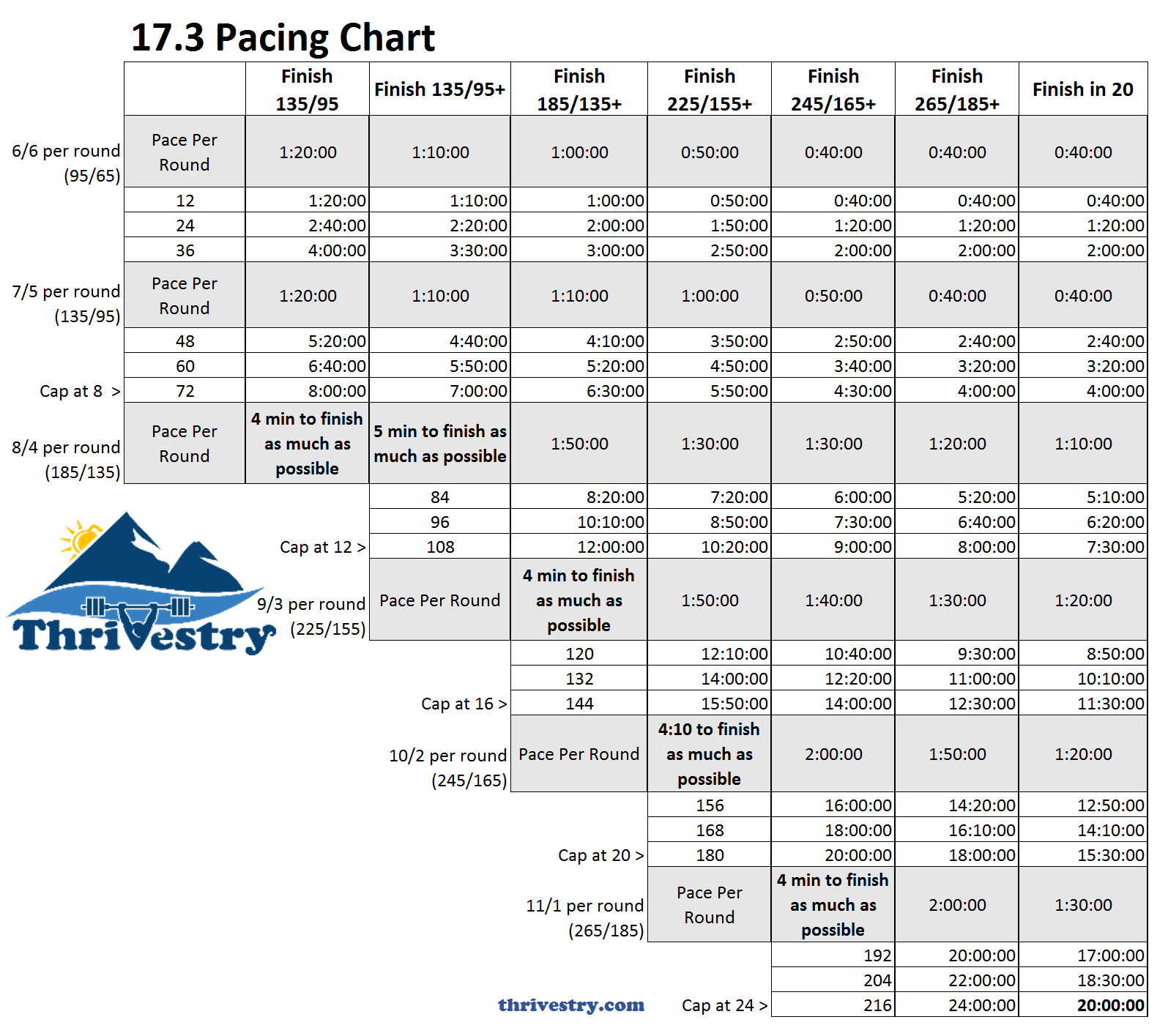 (Notes on the pacing chart below)

The workout may seem pretty confusing for some, so maybe I can explain it in terms that make more sense to you.

As many reps as possible in 8 minutes:

This means you need to average 1 minute 20 seconds per ‘round’ to make the minimum. Each round has 12 reps.  This works out to 1 rep every 6.6 seconds. Obviously you’ll want to go a faster if you can to build up time for the next round though!

For those who finish the 6 rounds above, you’ll get to start on the next part (immediately if you want). In fact, your ‘tie breaker’ time will be when you finish the 3rd round of any set. So if you want a good tie breaker time (because you can’t do the next load), be sure to go fast!

For the next part, as many reps as possible in 4 minutes:

The 1:20 rule still applies here, but if you were able to bank some time on the first part you’ll have extra time here!  For MANY people, this load jump will be too much. If you aren’t sure that you’ll get this load, plan on having some extra smaller plates so you can take your time and work up to the required weight.  These reps won’t count, but you’ll have 4 minutes to rest, get some pull ups done, and then ‘sneak’ up on the heavier load. Some people may even PR using this method!  Watch the clock so you can get a ‘smart’ number of reps.

If you are reasonably confident at this load, move through it at a good pace. Get the pull ups done in small fast sets (unless you are really good at them) and try and have some extra time to get the snatches done. If they are feeling good on round 2, try and speed them up for this round and round 3 for a faster tiebreaker score and for more time for the next round.

If you know you’ll be able to hammer these out, keep trying to stay ahead of the 1:20 pace to keep banking time for future rounds.

If you finish the 36 reps, you’ll get to move on to the next progression, and on and on. Similar to above, be ready to make smaller jumps up to the working weight if you need/want to.

Pick a column where you'd like to finish (most likely according to how competent you are with the next snatch jump). Stick to the pace, or faster if possible, but don't come out too hot early on and blow up for the later rounds. The paces for each set of 3 rounds are rough approximations and what we have seen from some athletes so far. Each row tells you where you need to be at the end of each 'round' (of 6/6, 7/5, etc.)

Warm Up the snatch?

I would definitely warm up the snatches up to and even including the weight you’d like to achieve. Have some smaller plates handy if you want to do some extra reps between the last required load and the new load

Chest to bar pull up notes

Remember that if you can do even one chest to bar pull up at a time, you should do this one ‘Rx’ to get the highest ranking.

Linking big sets on these should be reserved for only those that are really good at pull ups. Doing sets of 1, 2, or 3, will make the most sense for a lot of people. Just make sure that you aren’t wasting time between sets!  If you can do butterfly efficiently, and grip isn’t an issue on snatches, do them.

Make sure you are using a big ‘kip’ with lots of hips and legs. When you get tired, you will likely forget that you have a lower half. Don’t forget!

As the snatch weight goes up, it will be good to get the pull ups done at a faster clip, but don’t go so fast that you need an extended time to rest before your next snatch. You’ll want to slow down the last couple reps to start resting for the snatch (when it is a heavy load for you). Consider getting chalk, putting on a belt (if you are into that sort of thing), etc.

If you are comfortable with ‘grips’ for your hands, use them, but keep in mind that you may need to take them off for each round of snatches and this could cost you time.

Some people may benefit from doing ‘touch and go’s’ for larger sets, but most people will be better off doing singles.  Even Scott P. finished the workout and he was doing singles the entire time (coincidentally, he was also doing lots of sets of 3 pull ups from the beginning).

Move efficiently on these with good form. Muscling them early on will not help you in later rounds. Make sure to avoid NO REPS! Show your judge how low you will be going so there isn’t any confusion.

During the mid level loads for you, avoid the temptation to start with a really high hip position. This tends to happen when people get tired on metcons. You’ll probably still be able to get the reps done, but this will affect later attempts at your ‘heavy’ load. Start from a good pulling position.

I would recommend Oly shoes if you have them. They should not affect your pull ups, but if you are really worried about them, think about having them ready to put on for your last heavy snatches. It may cost time, but if you are only looking to get a rep or 5 at the next progression, you should have enough time to put them on.

Keep an eye on the clock. If you are making attempts at a heavy load, plan out how many attempts you can make.  If you are repping it out, finish it fast but avoid missed reps. If it doesn’t look like you are going to make it, try to pace it to finish the pull ups and get one or two more snatches (there will be a lot of ‘ties’ at the pull ups.

If you really need a high ranking on the leaderboard and the last load jump is sketchy for you, do the first attempt with the idea that you want to get the biggest load/reps. Don’t crush yourself for a good tie breaker.  The second attempt is where you can try and go faster for a fast tie breaker. You should end up having a bit more time for your attempts, so maybe you’ll even end up seeing an improvement there too! 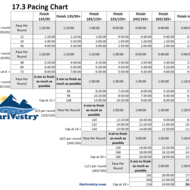